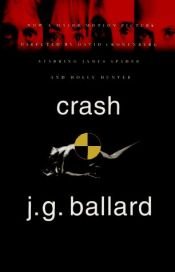 Crash is a novel by English author J. G. Ballard, first published in 1973. It is a story about symphorophilia or car-crash sexual fetishism: its protagonists become sexually aroused by staging and participating in real car-crashes.
It was a highly controversial novel: one publisher's reader returned the verdict "This author is beyond psychiatric help. Do Not Publish!" The novel was made into a movie of the same name in 1996 by David Cronenberg. An earlier, apparently unauthorized adaptation called Nightmare Angel was filmed in 1986 by Susan Emerling and Zoe Beloff. This short film bears the credit "Inspired by J.G. Ballard."

The Sexual Life of Catherine M

The Autobiography of Alice B. Toklas