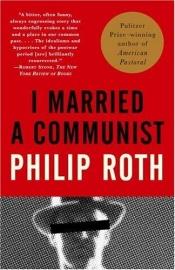 I Married a Communist

I Married a Communist is a Philip Roth novel concerning the rise and fall of Ira Ringold, known as "Iron Rinn." The story is narrated by Nathan Zuckerman, and is one of a trio of Zuckerman novels Roth wrote in the 1990s depicting the postwar history of Newark, New Jersey and its residents.
Ira and his brother Murray serve as two immense influences on the school-age Zuckerman, and the story is told as a contemporary reminiscence between Murray and Nathan on Ira's life. Although a communist, Ira became a star in radio theater. Personal conflicts with McCarthyite politicians, a gossip columnist, and his daughter-addled and manipulative wife all combine to destroy Ira and many of those around him.