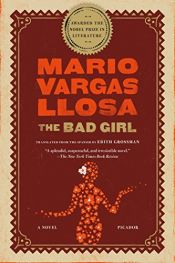 The Bad Girl, originally published in 2006 in Spanish as Travesuras de la niña mala, is a novel by Peruvian author Mario Vargas Llosa, who won the Nobel Prize in Literature in 2010.
Journalist Kathryn Harrison approvingly argues that the book is a rewrite of the French realist Gustave Flaubert's classic novel Madame Bovary. In Vargas Llosa's version, the plot relates the decades-long obsession of its narrator, a Peruvian expatriate, with a woman with whom he first fell in love when both were teenagers.

The Notebooks of Don Rigoberto