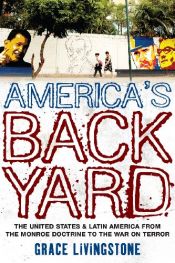 America's Backyard: The United States and Latin America from the Monroe Doctrine to the War on Terror

The United States has shaped Latin American history, condemning it to poverty and inequality by intervening to protect the rich and powerful. America’s Backyard tells the story of that intervention.

Using newly declassified documents, Grace Livingstone reveals the US role in the darkest periods of Latin American history, including Pinochet’s coup in Chile, the Contra War in Nicaragua and the death squads in El Salvador. She shows how George W Bush’s administration used the War on Terror as a new pretext for intervention; how it tried to destabilise leftwing governments and push back the ‘pink tide’ washing across the Americas. America’s Backyard also includes chapters on drugs, economy and culture. It explains why US drug policy has caused widespread environmental damage yet failed to reduce the supply of cocaine, and it looks at the US economic stake in Latin America and the strategies of the big corporations.

Today Latin Americans are demanding respect and an end to the Washington Consensus. Will the White House listen?

Beyond the Mexique Bay

The Art of Not Being Governed : An Anarchist Histor …