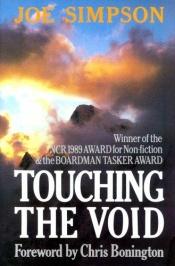 Touching the Void is a 1988 book by Joe Simpson, recounting his and Simon Yates' successful but disastrous and nearly fatal climb of the 6,344-metre Siula Grande in the Peruvian Andes in 1985. The book won the 1989 Boardman Tasker Prize for Mountain Literature and the 1989 NCR Book Award.
In 2003, fifteen years after it was first published, the book was turned into a documentary film of the same name, directed by Kevin MacDonald. The film won the Alexander Korda Award for Best British Film at the 2003 BAFTA Awards and was featured at the 2004 Sundance Film Festival. In 2014, the book was being used in the English literature AQA GCSE course nationally in England.
Simpson slipped down an ice cliff and landed awkwardly, crushing his tibia into his knee joint, thus breaking his right leg. The pair, whose trip had already taken longer than they intended due to bad weather on the ascent, had run out of fuel for their stove and could not melt ice or snow for drinking water. With bad weather closing in and daylight fading, they needed to descend quickly to the glacier, about 3,000 feet below.

The climb up to hell

Nothing Venture, Nothing Win

Postcards from the ledge

Banner in the sky