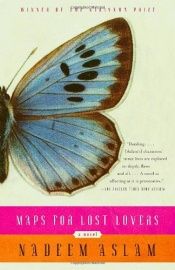 Maps for Lost Lovers is a novel by the British Pakistani writer Nadeem Aslam. Ostensibly about the murder of a pair of lovers, the book is in fact a minute dissection of working-class Pakistani immigrant communities that have settled in the north of England over the last 40 years.
Aslam spent 11 years writing this book; according to an interview, the first chapter alone took him 6 years to complete. The novel received widespread acclaim on publication, with critics repeatedly referring to the quality of its prose, its remarkable characters, and its exposé of the tortured immigrant experience.