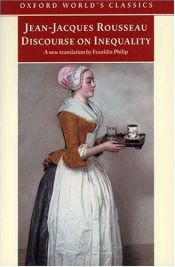 Discourse on the Origin and Basis of Inequality Among Men, also commonly known as the "Second Discourse", is a work by philosopher Jean-Jacques Rousseau.
Rousseau first exposes in this work his conception of a human state of nature, presented as a philosophical fiction, and of human perfectibility, an early idea of progress. He then explains the way, according to him, people may have established civil society, which leads him to present private property as the original source and basis of all inequality.