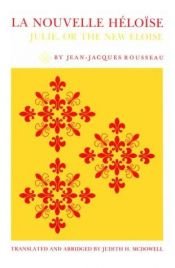 This landmark of the romantic movement not only greatly influenced the taste and morality of the eighteenth-century reading public but was also one of the most seminal and widely read literary works of its day. Seventy-two editions of the novel in French appeared between 1761 and 1800, and though Voltaire called its success one of the infamies of the century. It won for Rousseau a place beside the author of Candide as a director of European thought. The plot of the novel is one familiar to all literature; that of a fallen and regenerated woman. The first three parts are devoted to the celebration of the passionate, mutual love of Saint-Preux and Julie; the last three praise Julie's return to virtue as a faithful wife and dedicated mother. Professor McDowell's translation is precise but natural and conveys to the reader the distinctive flavor of Rousseau's style.