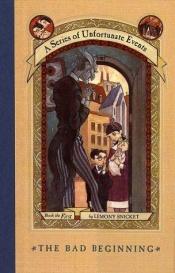 The Bad Beginning is the first novel of the children's novel series A Series of Unfortunate Events by Lemony Snicket. The novel tells the story of three children, Violet, Klaus, and Sunny Baudelaire, who become orphans following a fire and are sent to live with Count Olaf, who attempts to steal their inheritance.
The book was published on September 30, 1999, by Scholastic Inc. and illustrated by Brett Helquist. An audiobook was released in 2003, several special editions of the book have been made and the book has been translated into many different languages. The novel has received positive reviews.

One of my favorite series of all time. I loved this series when I was a kid

พี้ชยักษ์ (James and the Giant Peach) …