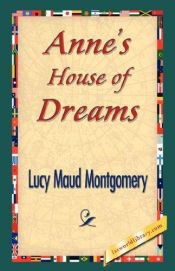 Anne's House of Dreams is a novel by Canadian author Lucy Maud Montgomery. It was first published in 1917 by McClelland, Goodchild and Stewart.
The novel is from a series of books written primarily for girls and young women, about a young girl named Anne Shirley. The books follow the course of Anne's life. It is set principally on Canada's Prince Edward Island, Montgomery's birthplace and home for much of her life.
The series has been called classic children's literature, and has been reprinted many times since its original publication.
Anne's House of Dreams is book five in the series, and chronicles Anne's early married life, as she and her childhood sweetheart Gilbert Blythe begin to build their life together.