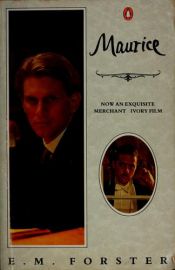 Maurice is a novel by E. M. Forster. A tale of same-sex love in early 20th-century England, it follows Maurice Hall from his schooldays, through university and beyond. It was written in 1913–1914, and revised in 1932 and 1959–1960. Although it was shown to selected friends, such as Christopher Isherwood, it was only published in 1971 after Forster's death. Forster did not seek to publish it during his lifetime, believing it unpublishable during that period.
Forster was close friends with the poet Edward Carpenter, and upon visiting his Derbyshire home in 1912, was motivated to write Maurice. The relationship between Carpenter and his partner, George Merrill, was the inspiration for that between Maurice and Alec Scudder.
Forster resisted publication because of public and legal attitudes to same-sex love – a note found on the manuscript read: "Publishable, but worth it?". Forster was particularly keen that his novel should have a happy ending, but knew that this would make the book too controversial. However, by the time he died, British attitudes, and law, had changed.
The novel has been adapted once for film and once for the stage.