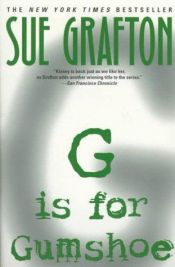 "G" Is for Gumshoe is the seventh novel in Sue Grafton's "Alphabet" series of mystery novels and features Kinsey Millhone, a private eye based in Santa Teresa, California.
In "G" Is for Gumshoe, Kinsey Millhone meets fellow investigator Robert Dietz when someone hires a hit man to kill her. While Kinsey is being stalked, she uncovers an unsolved murder that haunts the lives of her client Mrs. Irene Gersh and Irene's "mother" who uses the alias "Agnes Grey". In other developments in Kinsey's personal story, she loses her VW car, and her friend Vera Lipton becomes engaged.