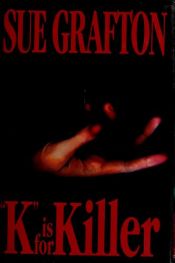 "K" Is for Killer is the 11th novel in Sue Grafton's "Alphabet" series of mystery novels and features Kinsey Millhone, a private eye based in Santa Teresa, California. The novel was a New York Times bestseller with a reported 600,000-copy first printing. Vice cop Cheney Phillips is introduced in this novel.
It was originally going to be titled "K" Is for Kidnap, until Sue Grafton's initial research revealed that kidnapping was a federal crime and realized that the FBI would never consult a small-time private investigator like Kinsey.

O is for Outlaw