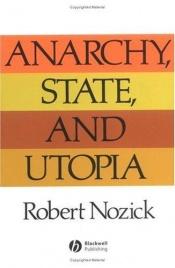 Anarchy, State, and Utopia is a 1974 book by the American political philosopher Robert Nozick. It won the 1975 U.S. National Book Award in category Philosophy and Religion, has been translated into 11 languages, and was named one of the "100 most influential books since the war" by the U.K. Times Literary Supplement.
In opposition to A Theory of Justice by John Rawls, and in debate with Michael Walzer, Nozick argues in favor of a minimal state, "limited to the narrow functions of protection against force, theft, fraud, enforcement of contracts, and so on." When a state takes on more responsibilities than these, Nozick argues, rights will be violated. To support the idea of the minimal state, Nozick presents an argument that illustrates how the minimalist state arises naturally from anarchy and how any expansion of state power past this minimalist threshold is unjustified.

What It Means to Be a Libertarian: A Personal Inter …

The FUTURE AND ITS ENEMIES: The Growing Conflict Ov …

The second treatise of government

The Ethics of Liberty