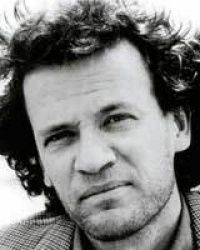 He was born in Spain of Canadian parents and raised in Costa Rica, France, Mexico, and Canada. As an adult, Martel has spent time in Iran, Turkey and India. After studying philosophy at Trent University in Peterborough, Ontario, Martel spent 13 months in India visiting mosques, churches, temples and zoos, and spent two years reading religious texts and castaway stories. His first published fictional work, Seven Stories, appeared in 1993. Now he lives in Saskatchewan, Canada.

Beatrice and Virgil is Canadian writer Yann Martel's third novel. First published in April 2010, it contains an allegorical tale about representations of the Holocaust. It tells the story of Henry, a novelist, who receives the manuscript of a play in a letter from a reader. Intrigued, Henry traces the letter to a …

... Unknown
The Facts Behind the Helsinki Roccamatios

Here are four unforgettable stories by the author of Life of Pi. Written earlier in Martel's career, these tales display that startling mix of dazzle and depth that have made Yann Martel an international phenomenon. Inventive in form and timeless in content, each story is moving and thought-provoking. A Canadian …

Edgy, funny and devastating, Self is the fictional autobiography of a young writer at the heart of which is a startling twist. This extraordinary life meanders through a rich, complicated, bittersweet world. The discoveries of childhood give way to the thousand pangs of adolescence, culminating in the sudden shocking …

... Unknown
The Bookclub-in-a-box Discussion Guide to Life of P …

... Unknown
The High Mountains of Portugal

NEW YORK TIMES BESTSELLER * "Fifteen years after The Life of Pi, Yann Martel is taking us on another long journey. Fans of his Man Booker Prize-winning novel will recognize familiar themes from that seafaring phenomenon, but the itinerary in this imaginative new book is entirely fresh. . . . Martel's writing has never …