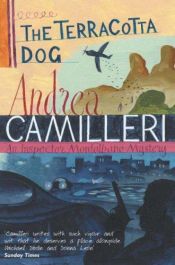 The Terracotta Dog is a 1996 novel by Andrea Camilleri, translated into English in 2002 by Stephen Sartarelli. It is the second novel in the internationally popular Inspector Montalbano series.
While chasing down a mafia crime, Montalbano finds a cave with symbolic artifacts and the bodies of two young lovers, hidden since World War II.
While it was the second of the published books, the movie was actually produced by RAI out of order, two years later in 2000, as the 4th film. The story starts off with "Tano Il Greco", a tired mafia boss, making a deal with Montalbano to stage his arrest in order for him to save face. The arrest causes Montalbano to have to appear at a press conference and be considered for promotion, both of which he does not appreciate. At the same time there has also been a theft of a grocery store delivery truck and the two crimes come together with inside information from Tano that leads Montalbano and his team to search for a secret cave used as a shelter during world war two and now used by mafia arms smugglers.

Dodenmis (A Taste for Death)