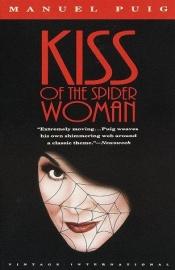 Kiss of the Spider Woman is a 1976 novel by Argentine writer Manuel Puig. It depicts the daily conversations between two cellmates in an Argentine prison, Molina and Valentín, and the intimate bond they form in the process. It is generally considered Puig's most successful work.
The novel's form is unusual in that there is no traditional narrative voice, one of the primary features of fiction. It is written in large part as dialogue, without any indication of who is speaking, except for a dash to show a change of speaker. There are also significant portions of stream-of-consciousness writing. What is not written as dialogue or stream-of-consciousness is written as meta-fictional government documentation. The conversations between the characters, when not focused on the moment at hand, are recountings of films that Molina has seen, which act as a form of escape from their environment. Thus there are a main plot, several subplots, and five additional stories that comprise the novel.
Puig adapted the novel into a stage play in 1983, with an English translation by Allan Baker. It was also made into an Academy Award-winning film in 1985 and a Broadway musical in 1993.