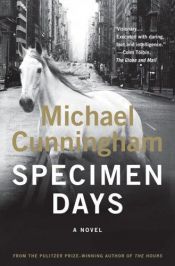 Specimen Days is a 2005 novel by American writer Michael Cunningham. It contains three stories: one that takes place in the past, one in the present, and one in the future. Each of the three stories depicts three central, semi-consistent character-types: a young boy, a man, and a woman. Walt Whitman's poetry is also a common thread in each of the three stories, and the title is from Whitman's own prose works.
The film rights to the book have been optioned by American movie producer Scott Rudin, who has turned Cunningham's previous novel The Hours into an Academy Award-winning movie.

It's not dark. It just has time travel in it.