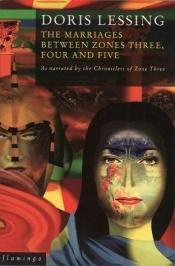 The Marriages Between Zones Three, Four and Five is a 1980 science fiction novel by Nobel Prize in Literature-winner Doris Lessing. It is the second book in her five-book Canopus in Argos series, the first being Shikasta. It was first published in the United States in January 1980 by Alfred A. Knopf, and in the United Kingdom in May 1980 by Jonathan Cape.
The novel takes place in three of six metaphysical Zones that encircle the planet Shikasta, and concerns two ordained marriages that link the patriarchal and militaristic Zone Four with the matriarchal and egalitarian Zone Three, and the tribal and barbaric Zone Five. The story is told from the point of view of the matriarchal utopian Zone Three, and is about gender conflict and the breaking down of barriers between the sexes. Lessing called the Canopus in Argos series "space fiction", but The Marriages Between Zones Three, Four and Five is generally referred to as feminist science fiction.
In the mid-1960s Lessing had become interested in Sufism, an Islamic belief system, and she used many Sufi concepts in the Canopus in Argos series.

A Door into Ocean

The Gate to Women's Country