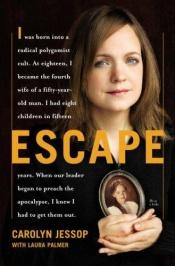 Escape is a book by Carolyn Jessop and Laura Palmer. It discusses Jessop's upbringing in the FLDS polygamous community. Her childhood was affected by the sect's suspicion of outsiders, the division that took place in that FLDS in the 1970s and '80s and by the increasing strictness of the sect her family belonged to. She experienced life with a mother who suffered from depression and was violent with her children. She observed conflict between her parents over celebrating Christmas and the effect of her surroundings and the strictness of the sect on her mother's mental condition and on her mother's relationship with her husband. Importantly for later, she observed and learned how to work round her mother's mood swings and how other children reacted to spanking so as to mitigate the violence but she also learned from her grandmother to take great pride in her church's tradition of plural marriage.
Carolyn wanted to go to college and study medicine but when her father went to seek permission for her to go to college, the condition was that she marry Merril Jessop.

Gift from the Sea

The Kingdom of Matthias: A Story of Sex and Salvati …