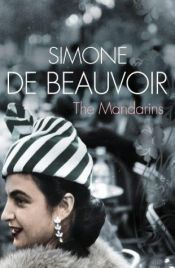 The Mandarins is a 1954 roman à clef by Simone de Beauvoir. Beauvoir was awarded the Prix Goncourt prize in 1954 for The Mandarins. It was first published in English in 1956.
The book follows the personal lives of a close-knit group of French intellectuals from the end of World War II to the mid fifties. The title refers to the scholar-bureaucrats of imperial China. The characters at times see themselves as ineffectual "mandarins" as they attempt to discern what role, if any, intellectuals will have in influencing the political landscape of the world after World War II. As in de Beauvoir's other works, themes of feminism, existentialism, and personal morality are explored as the characters navigate not only the intellectual and political landscape but also their shifting relationships with each other.
The British novelist and philosopher Iris Murdoch described the book as "endearing because of its persistent seriousness".