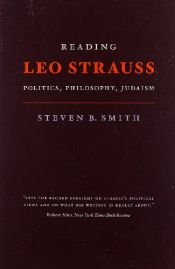 by Steven B. Smith

Interest in Leo Strauss is greater now than at any time since his death, mostly because of the purported link between his thought and the political movement known as neoconservatism. Steven B. Smith, though, surprisingly depicts Strauss not as the high priest of neoconservatism but as a friend of liberal democracy—perhaps the best defender democracy has ever had. Moreover, in Reading Leo Strauss, Smith shows that Strauss’s defense of liberal democracy was closely connected to his skepticism of both the extreme Left and extreme Right.

It was as a skeptic, Smith argues, that Strauss considered the seemingly irreconcilable conflict between reason and revelation—a conflict Strauss dubbed the “theologico-political problem.” Calling this problem “the theme of my investigations,” Strauss asked the same fundamental question throughout his life: what is the relation of the political order to revelation in general and Judaism in particular? Smith organizes his book with this question and assesses Strauss’s attempt to direct the teaching of political science away from the examination of mass behavior and interest-group politics and toward the study of the philosophical principles on which politics are based. With his provocative, lucid study, Smith establishes a distinctive form of Straussian liberalism himself.

“By returning to the source and examining what Strauss actually wrote, Mr. Smith lets the breeze of reason into the feverish sickroom of ideology. He portrays a Strauss who cherished democracy as the best bulwark against tyranny, and who valued intellectual honesty above all. By the time Mr. Smith is done, nothing is left of the Strauss caricature except the ignorance and malice that fathered it.”—Adam Kirsch, New York Sun