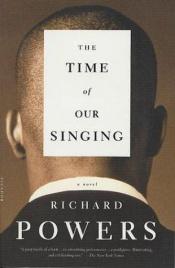 The Time of Our Singing is a novel by American writer Richard Powers. It tells the story of two brothers involved in music, dealing heavily with issues of prejudice. Their parents met at Marian Anderson's concert on the steps of the Lincoln Memorial after she had been barred from any other legitimate concert venue. The story goes back and forth between the generations describing the unusual coupling of a German-Jewish physicist who has lost his family in the holocaust and a black woman from Philadelphia both of whom have strong musical backgrounds. They impart their love of music to their family. Their two boys go on to study music and become professional musicians. One a singer, the other a pianist.
This is a complex epic novel juxtaposing historical events covering most of the 20th century, depicting racism and the development of civil rights efforts and the author's love and knowledge of music and physics. The book can be read on many levels but those who have at least some familiarity with music will find a plethora of references to music from all eras and styles.