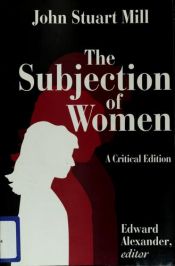 The Subjection of Women is the title of an essay written by John Stuart Mill in 1869, possibly jointly with his wife Harriet Taylor Mill, stating an argument in favour of equality between the sexes. At the time it was published in 1869, this essay was an affront to European conventional norms for the status of men and women.
John Stuart Mill credited his wife, Harriet Taylor Mill, with co-writing the essay. While some scholars agreed by 2009 that John Stuart Mill was the sole author, it is also noted that some of the arguments are similar to Harriet Taylor Mill's essay The Enfranchisement of Women which was published in 1851. Harriet Taylor Mill's daughter, Helen Taylor, is believed to have contributed to the essay as well.
Mill was convinced that the moral and intellectual advancement of humankind would result in greater happiness for everybody. He asserted that the higher pleasures of the intellect yielded far greater happiness than the lower pleasure of the senses. He conceived of human beings as morally and intellectually capable of being educated and civilised.

The first stone : some questions about sex and powe …