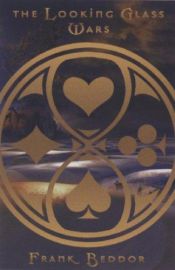 The Looking Glass Wars is a series of novels by Frank Beddor, heavily inspired by Lewis Carroll's Alice's Adventures in Wonderland and Through the Looking-Glass. The basic premise is that the two books written by Lewis Carroll are a distortion of the 'true story' portrayed in these novels. It features twists and turns on the original story, such as the white rabbit really being Alyss's tutor, Bibwit Harte, and the Mad Hatter is really a very agile, somber bodyguard called Hatter Madigan.
The Looking Glass Wars is the first book in a trilogy by the same name. It is currently going through further developments in a variety of fields, such as a spin-off comic book series entitled Hatter M. First released in the United Kingdom in 2004, The Looking Glass Wars was released in the United States on September 26, 2006. The second book in the trilogy, Seeing Redd, was released on August 21, 2007. The third book, ArchEnemy, was released on October 15, 2009.

Castaways of the Flying Dutchman