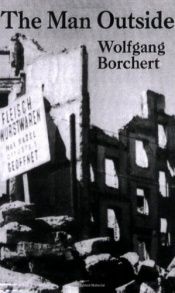 The Man Outside is a play by Wolfgang Borchert, written in a few days in the late autumn of 1946. It made its debut on German radio on 13 February 1947.
The Man Outside describes the hopelessness of a post-war soldier called Beckmann who returns from Russia to find that he has lost his wife and his home, as well as his illusions and beliefs. He finds every door he comes to closed. Even the Elbe River rejects his suicide, washing him up on shore. The play ends with what can be assumed to be Beckmann's death.
Due to its release during the sensitive immediate postwar period, Borchert subtitled his play "A play that no theatre wants to perform and no audience wants to see." Despite this, the first radio broadcast was very successful. The first theatrical production of The Man Outside opened on the day after Borchert's death, 21 November 1947.
The play consists of five scenes in one act. It makes use of expressionist forms and Brechtian techniques, such as the Verfremdungseffekt to disorient and engage its audience.

The Resistible Rise of Arturo Ui