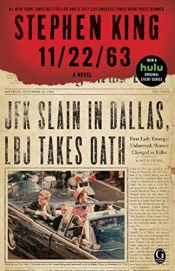 11/22/63 is a novel by Stephen King about a time traveler who attempts to prevent the assassination of President John Fitzgerald "Jack" Kennedy, which occurred on November 22, 1963. The novel was announced on King's official site on March 2, 2011. A short excerpt was released online on June 1, 2011, and another excerpt was published in the October 28, 2011, issue of Entertainment Weekly The novel was published on November 8, 2011 and quickly became a number-one bestseller. It stayed on The New York Times Best Seller list for 16 weeks. 11/22/63 won the 2011 Los Angeles Times Book Prize for Best Mystery/Thriller and the 2012 International Thriller Writers Award for Best Novel, and was nominated for the 2012 British Fantasy Award for Best Novel and the 2012 Locus Award for Best Science Fiction Novel.
The novel required deep research to accurately portray the late 1950s and early 1960s. King commented on the amount of research it required, saying "I've never tried to write anything like this before. It was really strange at first, like breaking in a new pair of shoes."