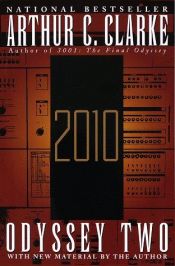 2010: Odyssey Two is a 1982 science fiction novel by Arthur C. Clarke. It is the sequel to the 1968 novel 2001: A Space Odyssey, but continues the story of Stanley Kubrick's film adaptation with the same title rather than Clarke's original novel, which differed from the film in some respects.
Set in the year 2010, the plot centers on a joint Soviet-American mission aboard the Soviet spacecraft Leonov. The mission has several objectives, including salvaging the spaceship Discovery and investigating the mysterious "monolith" discovered by Dave Bowman in 2001: A Space Odyssey. It was nominated for the Hugo Award for Best Novel in 1983. The novel was adapted for the screen by Peter Hyams and released as a film in 1984.

Pebble in the Sky