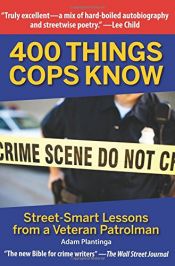 How does it feel to be in a high-speed car chase? What is it like to shoot someone? What do cops really think about the citizens they serve? Nearly everyone has wondered what it’s like to be a police officer, but no civilian really understands what happens on the job.

“400 Things Cops Know” shows police work on the inside, from the viewpoint of the regular cop on the beat―a profession that can range from rewarding to bizarre to terrifying, all within the course of an eight-hour shift. Written by veteran police sergeant Adam Plantinga, “400 Things Cops Know” brings the reader into life the way cops experience it―a life of danger, frustration, occasional triumph, and plenty of grindingly hard routine work.

In a laconic, no-nonsense, dryly humorous style, Plantinga tells what he’s learned from 13 years as a patrolman, from the everyday to the exotic―how to know at a glance when a suspect is carrying a weapon or is going to attack, how to kick a door down, how to drive in a car chase without recklessly endangering the public, why you should always carry cigarettes, even if you don’t smoke (offering a smoke is the best way to lure a suicide to safety), and what to do if you find a severed limb (don’t put it on ice―you need to keep it dry.)

Sometimes heartbreaking and often hilarious, “400 Things Cops Know” is an eye-opening revelation of what life on the beat is really all about.

Into the Kill Zone: A Cop's Eye View of Deadly Forc …

The New Jim Crow: Mass Incarceration in the Age of …