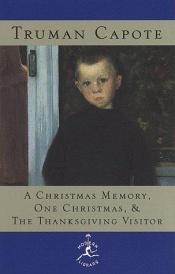 A Christmas Memory: One Christmas, & The Thanksgiving Visitor

"A Christmas Memory" is a short story by Truman Capote. Originally published in Mademoiselle magazine in December 1956, it was reprinted in The Selected Writings of Truman Capote in 1963. It was issued in a stand-alone hardcover edition by Random House in 1966, and it has been published in many editions and anthologies since.
The largely autobiographical story, which takes place in the 1930s, describes a period in the lives of the seven-year-old narrator and an elderly woman who is his distant cousin and best friend. The evocative narrative focuses on country life, friendship, and the joy of giving during the Christmas season, and it also gently yet poignantly touches on loneliness and loss.
Now a holiday classic, "A Christmas Memory" has been broadcast, recorded, filmed, and staged multiple times, in award-winning productions.

Family Under the Bridge

Five little Peppers and how they grew

Amazing Grace: The Lives of Children and the Consci …