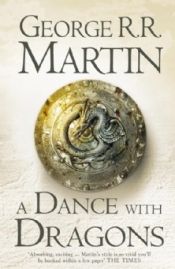 A Dance with Dragons

A Dance with Dragons is the fifth of seven planned novels in the epic fantasy series A Song of Ice and Fire by American author George R. R. Martin. In some areas the paperback edition was published in two parts titled Dreams and Dust and After the Feast. It is the first novel in the series to be published following the commencement of the HBO series adaptation, Game of Thrones.
A Dance with Dragons was originally intended to be the title of the second novel in the sequence, when Martin still envisioned the series as a trilogy. Some early US editions of A Game of Thrones list A Dance of Dragons as the forthcoming second volume in the series. The 1998 anthology Legends, which features the novella The Hedge Knight from the same universe, lists A Dance of Dragons as the third installment of a four-book series. Like the previous four volumes in the Ice and Fire series, the book includes a lengthy appendix, with the volume running a total of 1,040 pages.
On March 3, 2011, publishing imprint Bantam Spectra announced that the novel would be released on July 12, 2011.