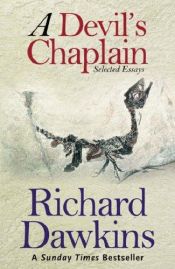 A Devil's Chaplain, subtitled Reflections on Hope, Lies, Science, and Love is a 2003 book of selected essays and other writings by Richard Dawkins. Published five years after his previous book Unweaving the Rainbow, it contains 32 essays covering subjects including pseudoscience, genetic determinism, memetics, terrorism, religion and creationism. A section of the book is devoted to Dawkins' late adversary Stephen Jay Gould.
The book's title is a reference to a quotation of Charles Darwin, made in reference to Darwin's lack of belief in how "a perfect world" was designed by God: "What a book a devil's chaplain might write on the clumsy, wasteful, blundering low and horridly cruel works of nature!"