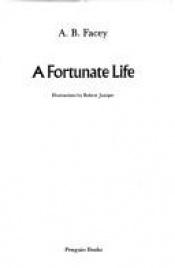 Autobiography by A. B. Facey

A Fortunate Life is an autobiography by Albert Facey published in 1981, nine months before his death. It chronicles his early life in Western Australia, his experiences as a private during the Gallipoli campaign of World War I and his return to civilian life after the war. It also documents his extraordinary life of hardship, loss, friendship and love.
During the initial days of its publication, Albert Facey became a nationwide celebrity. Despite his renowned life, Facey considered his life to be simple and "had no idea what all the fuss was about". When asked on an interview, where the name of the book originated. He replied, "I called it 'A Fortunate Life' because I truly believe that is what I had".
After its great reception it has become a classic piece of Australian literature and is one of Australia’s most beloved books. Since its publication in 1981 it has sold over 800,000 copies and become a primary account of the Australian experience during World War I. It is also featured in many Australian primary and secondary schools as a reading book for young adults.

Red Carpets and Other Banana Skins

Out on a limb