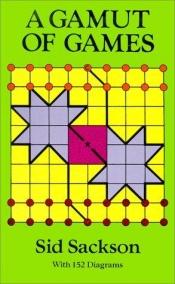 A Gamut of Games

A Gamut of Games, written by Sid Sackson and first published in 1969, contains rules for a large number of paper and pencil, card, and board games. Many of the games in the book had never before been published. It is considered by many to be an essential text for anyone interested in abstract strategy games, and a number of the rules were later expanded into full-fledged published board games.
Some of the games which were later sold separately include Focus, Property and Origins of World War I; Robert Abbott expanded his game Crossings, published here, into the more-refined title Epaminondas. Many of the games covered in the book were creations of Sid Sackson himself, who was a prolific game designer.
The sections of the book and the games covered therein are as follows:

Harrington on Hold'em Expert Strategy for No Limit …

The Second Book of Go (Beginner and Elementary Go B …