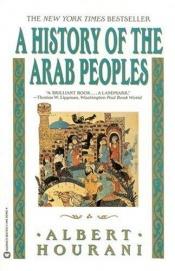 A History of the Arab Peoples

A History of the Arab Peoples is a book written by the British-born Lebanese historian Albert Hourani.
The book presents the history of the Arabs from the advent of Islam to the late 20th Century. More recent editions contain an afterword by Malise Ruthven bringing the history up to the present day including the Invasion of Iraq.
Hourani follows the methodology employed by Ibn Khaldun in his Muqaddimah, specifically the reliance on the concept of asabiyyah as a means of accounting for dynastic and political changes. Thus, the book involves a considerable amount of social history as well as economic history in order to account for the rise and subsequent fall of historical powers such as the Umayyad and Ottoman Empires.
Hourani's specialisation was in intellectual history, and this is also a focus of this work. Considerable rigour is given to explanations of the rise of Arab nationalism, Salafism, Ba'athism and Islamism, although, as Ruthven notes in his afterword, much of the rise of the latter ideology took place after the book was published.

The Crusades Through Arab Eyes