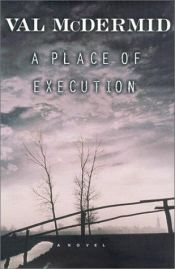 A Place of Execution

A Place of Execution is an acclaimed crime novel by Val McDermid, first published in 1999. The novel won the Los Angeles Times Book Prize, the 2001 Dilys Award, was shortlisted for both the Gold Dagger and the Edgar Award, and was chosen by the New York Times as one of the most notable books of the year.
It has two parallel storylines; the first, set in 1963, follows Detective Inspector George Bennett, who attempts to locate a missing girl in Derbyshire. The second, set in the present day, follows journalist Catherine Heathcote, whose plans to publish a story of the investigation are derailed when Bennett inexplicably stops cooperating and she attempts to find out why.

The Torment of Others

One Across, Two Down

The Keys to the Street