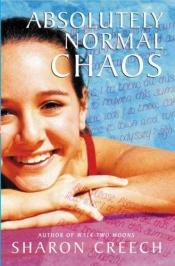 Absolutely Normal Chaos is a children's or young-adult novel by Sharon Creech, published in the U.K. by Macmillan Children's Books in 1990. It was the American author's first book for children, completed at the midpoint of nearly two decades living in England and Switzerland. Although set in her hometown Euclid, Ohio, it was not published in her native country until 1995, after she won the annual Newbery Medal recognizing Walk Two Moons as the preceding year's best American children's book.
Absolutely Normal Chaos is a 13-year-old girl's "complete and unabridged journal for English class" and can be classed as a bildungsroman.