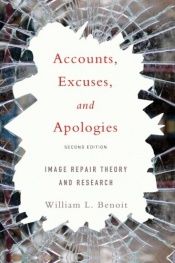 In our constantly plugged-in and connected world, image is everything. People, groups, organizations, and countries frequently come under suspicion of wrongdoing and sometimes require defense. This fully updated edition of the 1994 volume investigates the situations in which threats to image arise and describes the image-repair strategies that may be used to help defuse these threats, such as denial and apology. The author reviews various theories on image repair, and extends prior research on the topic to include work on persuasion or attitude change.

Five contexts for image repair are examined: corporate, political, sports/entertainment, international, and third party (when one person or organization tries to repair the image of another). New case studies include the British Petroleum oil spill in the Gulf of Mexico, Anthony Weiner, Lance Armstrong, Apple’s apology to China over the iPhone, and Prime Minister David Cameron’s apology for Bloody Sunday.

“This is an extremely valuable update to the most influential book ever published on crisis communication.” — Timothy L. Sellnow, coauthor of Theorizing Crisis Communication

Voodoo histories : The role of the conspiracy theor …

The Production of Culture : Media and the Urban Art …

Lords Of The Sea