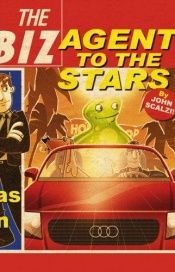 Agent to the Stars

Agent to the Stars is a novel by John Scalzi. It tells the story of Tom Stein, a young Hollywood agent who is hired by an alien race to handle the revelation of their presence to humanity.
Scalzi started Agent to the Stars in 1997 as his "practice" novel, to see if he could write a novel. He published it as a shareware novel on his web site in 1999, requesting that readers send him $1 if they liked the story. After five years, during which he reports he made about $4,000, he stopped asking for further donations.
After the publication of Scalzi's second book, Old Man's War, by Tor Books, a limited edition of Agent to the Stars was published in 2005 by Subterranean Press, with a cover by Mike Krahulik of Penny Arcade fame. Tor later released a trade paperback edition in November 2008, and a mass market edition in December 2010. An audiobook version narrated by Wil Wheaton was released on December 7, 2010.

The Moon Is a Harsh Mistress

Soon I Will Be Invincible