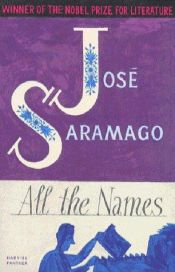 Senhor José is a low-grade clerk in the city's Central Registry, where the living and the dead share the same shelf space. A middle-aged bachelor, he has no interest in anything beyond the certificates of birth, marriage, divorce, and death that are his daily routine. But one day, when he comes across the records of an anonymous young woman, something happens to him. Obsessed, Senhor José sets off to follow the thread that may lead him to the woman-but as he gets closer, he discovers more about her, and about himself, than he would ever have wished.
The loneliness of people's lives, the effects of chance, the discovery of love-all coalesce in this extraordinary novel that displays the power and art of José Saramago in brilliant form.

It is a very well written book, which is no surprise for Saramago. In terms of my own personal objectives in reading (mainly pleasure and reflection), I would like to point out I found some specific sentences very interesting (such as when the ceiling is considered a character which is always watching the person who lives under it), but I also think that the second half of the book is too slow, with less interesting aspects than the first half.