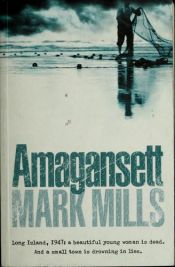 The Whaleboat House is a 2004 crime novel by British writer Mark Mills. It is set shortly after the Second World War with the events taking place in and around the small Long Island fishing village of Amagansett.
The novel was originally published under the name Amagansett when it first appeared in 2004. However, when it was later published in paperback, the publishers, HarperCollins, changed the name to The Whaleboat House after deciding that the original title was too elliptical.

The Meaning of Night