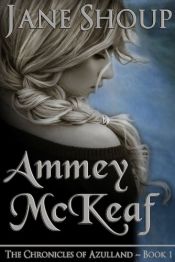 At nineteen, Ammey McKeaf is a golden-haired beauty that is beloved and protected, not only by her father, the most revered General in Azulland, but also by five elder brothers, all champions of the games that are held in the medieval island country. Her brothers have trained and challenged her all of her life, especially at swordsmanship, which will serve her well.

Trouble stirs when Marko Corin, the ambitious leader of Bellux-Abry, seeks to gain control of the country. His small bands of highly trained soldiers, known as 'wolf packs,' roam the country, reaping destruction and death. When a pack strikes close to the Forge, home to the McKeafs, Ammey is escorted to sanctuary―but sanctuary is a thing of the past.

As violence reigns, Ammey is rescued and taken into the mystical Vihlae Forest, where she discovers strength she did not know she possessed, and learns the art of survival from one of her rescuers, sparking an undeniable passion. As Ammey travels from one end of Azulland to the other, battling to survive and protect those around her, she will be tried and tested beyond anything she could have imagined, but will her efforts be enough to save herself and those she loves?

A Song for Arbonne

The Slow Regard of Silent Things