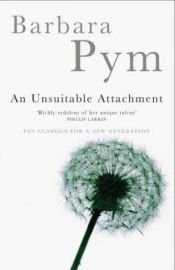 An Unsuitable Attachment is a novel by Barbara Pym, written in 1963 and published posthumously in 1982.
This novel is notable as being the first of Pym's novels to be rejected by publishers after she had established herself as a novelist. The book was originally rejected by Cape, who had published Pym's first six novels. According to some accounts, the reason was its being "out of step with the racier literary climate of the sixties"; others say Cape and possible further publishers viewed it as commercially unviable, even when endorsed by Philip Larkin; - "It was a great pleasure and excitement to me to read An Unsuitable Attachment in typescript and I thoroughly enjoyed it. I found it continuously amusing and interesting - I have tried to keep my eye open for anything that would suggest why Cape's should not publish it, and I am bound to say that it still seems a mystery to me." This began a period in the literary "wilderness" which ended only in 1978, shortly before the author's death.