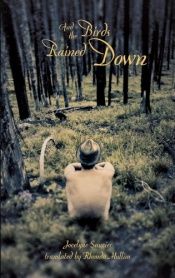 And the Birds Rained Down

Tom and Charlie have decided to live out the remainder of their lives on their own terms, hidden away in a remote forest, their only connection to the outside world a couple of pot growers who deliver whatever they can’t eke out for themselves.

But one summer two women arrive. One is a young photographer documenting a a series of catastrophic forest fires that swept Northern Ontario early in the century; she’s on the trail of the recently deceased Ted Boychuck, a survivor of the blaze. And then the elderly aunt of the one of the pot growers appears, fleeing one of the psychiatric institutions that have been her home since she was sixteen. She joins the men in the woods and begins a new life as Marie-Desneige. With the photographer’s help, they find Ted’s series of paintings about the fire, and begin to decipher the dead man’s history.

A haunting meditation on aging and self-determination, And the Birds Rained Down, originally published in French as Il pleuvait des oiseaux, was the winner of the Prix des Cinq Continents de la Francophonie, the first Canadian title to win this honour. It was winner of the Prix des lecteurs Radio-Canada, the Prix des collégiens du Québec, the Prix Ringuet 2012 and a finalist for the Grand Prix de la ville de Montréal.

'Nostalgic and beautifully grotesque, this novel is delightfully baroque and, although short, so striking it will simply never leave you.'
The Coast

The Art of Fielding