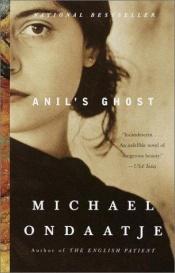 Anil’s Ghost is the critically acclaimed fourth novel by Michael Ondaatje. It was first published in 2000 by McClelland and Stewart.
Anil’s Ghost follows the life of Anil Tissera, a native Sri Lankan who left to study in Britain and then the United States on a scholarship, during which time she has become a forensic pathologist. She returns to Sri Lanka in the midst of its merciless civil war as part of a Human Rights Investigation by the United Nations. Anil, along with archaeologist Sarath Diyasena, discovers the skeleton of a recently murdered man in an ancient burial ground which is also a government-protected zone. Believing the murder to be politically motivated, Anil and Sarath set out to identify the skeleton, nicknamed Sailor, and bring about justice for the nameless victims of the war.