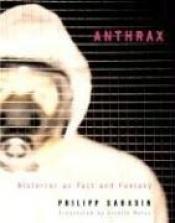 Anthrax : bioterror as fact and fantasy

The potential for creating and using biological weapons to wreak havoc is an urgent concern not just in America, but worldwide. In fact, many security experts believe that the next act of widespread terrorism will likely come from a weapon of biochemical means.

In Anthrax: Bioterror as Fact and Fantasy, Philipp Sarasin explores the real threats of biological weapons--in contrast to the idea of biological substances as nebulous agents of terror--by analyzing the famous anthrax scares that occurred in the United States in 2001. Basing his analysis on government documents and media coverage between the events of September 11, 2001, and the beginning of the Iraq War in March 2003, he shows that the anthrax letters became the necessary fantasy-link between the 9/11 attacks and Saddam Hussein's "weapons of mass destruction." While many bioterrorism experts agree that it would be difficult to use anthrax effectively as a weapon in a large-scale attack, the anthrax scares that occurred in the wake of the September 11 terrorist attacks amplified the American public's fear and uncertainty about what might come next. In effect, these incidents infected the American psyche and created an increased sense of vulnerability that shaped the public's understanding of the War on Terror.

Sarasin, in offering a European's view of the U.S. reaction to the anthrax scare, argues that while threats of bioterrorism are real, they are disproportionate to the fantasmal fears and illusions that now permeate American politics and culture. In short, fear of bioterror has contaminated modern American life.