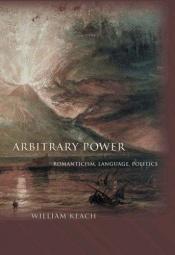 This book explores previously unexamined links between the arbitrary as articulated in linguistic theories on the one hand, and in political discourse about power on the other. In particular, Willam Keach shows how Enlightenment conceptions of the arbitrary were contested and extended in British Romantic writing. In doing so, he offers a new paradigm for understanding the recurrent problem of verbal representation in Romantic writing and the disputes over stylistic performance during this period. With clarity and force, Keach reads these phenomena in relation to a rapidly shifting literary marketplace and to the social pressures in Britain generated by the French Revolution, the Napoleonic Wars, and the class antagonisms that culminated in the Peterloo Massacre.

The question of what it means to think of language or politics as arbitrary persists through postmodern thinking, and this book advances an unfinished dialogue between Romantic culture and the critical techniques we currently use to analyze it. Keach's intertwined linguistic and political account of arbitrary power culminates in a detailed textual analysis of the language of revolutionary violence. Including substantial sections on Blake, Wollstonecraft, Wordsworth, Coleridge, Byron, P. B. Shelley, Keats, and Anna Jameson, Arbitrary Power will engage not only students and scholars of eighteenth- and nineteenth-century literature but also those interested in critical and linguistic theory and in social and political history.

Julie, or the New Heloise

Beyond heaving bosoms : the Smart Bitches' guide to …

The Jane Austen handbook : a sensible yet elegant g …

The Delighted States: A Book of Novels, Romances, & …