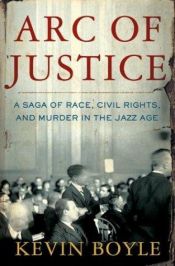 Arc of Justice: A Saga of Race, Civil Rights, and Murder in the Jazz Age

Arc of Justice: A Saga of Race, Civil Rights, and Murder in the Jazz Age is a 2004 book by historian Kevin Boyle, published by Henry Holt. The book chronicles racism in Detroit during the 1920s Jazz Age through the lens of Ossian Sweet, a grandson of a slave who becomes a doctor and eventually moves from the ghetto to an all-white middle-class neighborhood. When racist whites attack and invade the Sweet home, a white man is killed. Sweet and his family are persecuted by the legal system, leading to the deaths of members of Sweet's family and the destruction of Sweet's career as a physician.
The book won the 2004 National Book Award for Nonfiction.

The New Jim Crow: Mass Incarceration in the Age of …