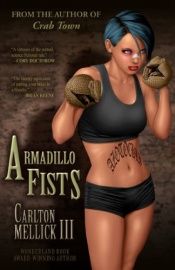 A weird-as-hell gangster story set in a world where people drive giant mechanical dinosaurs instead of cars.

Her name is Psycho June Howard, aka Armadillo Fists, a woman who replaced both of her hands with living armadillos. She was once the most bloodthirsty fighter in the world of illegal underground boxing. But now she is on the run from a group of psychotic gangsters who believe she's responsible for the death of their boss. With the help of a stegosaurus driver named Mr. Fast Awesome--who thinks he is God's gift to women even though he doesn't have any arms or legs--June must do whatever it takes to escape her pursuers, even if she has to kill each and every one of them in the process.

Strange, engaging characters, breakneck pacing, and jam-packed with more brilliantly weird concepts than you'll know what to do with--this is cult author Carlton Mellick III at his best.

This Book Is Full of Spiders: Seriously, Dude, Don' …