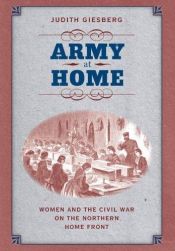 Army at Home: Women and the Civil War on the Northern Home Front (Civil War America)

Introducing readers to women whose Civil War experiences have long been ignored, Judith Giesberg examines the lives of working-class women in the North, for whom the home front was a battlefield of its own.

Black and white working-class women managed farms that had been left without a male head of household, worked in munitions factories, made uniforms, and located and cared for injured or dead soldiers. As they became more active in their new roles, they became visible as political actors, writing letters, signing petitions, moving (or refusing to move) from their homes, and confronting civilian and military officials.

At the heart of the book are stories of women who fought the draft in New York and Pennsylvania, protested segregated streetcars in San Francisco and Philadelphia, and demanded a living wage in the needle trades and safer conditions at the Federal arsenals where they labored. Giesberg challenges readers to think about women and children who were caught up in the military conflict but nonetheless refused to become its collateral damage. She offers a dramatic reinterpretation of how America's Civil War reshaped the lived experience of race and gender and brought swift and lasting changes to working-class family life.

Something from the Oven: Reinventing Dinner in 1950 …